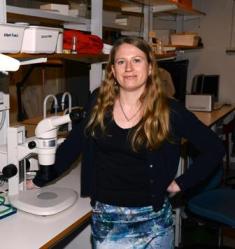 My main interest is in the evolutionary genetics of sex differences, especially sexually antagonistic genetic variation — in other words, when the same gene has opposite effects on the fitness of males and females. Sexually antagonistic genes and traits are interesting because they may hold the key to one of the long-standing paradoxes in evolutionary biology: the maintenance of standing genetic variation. When selection is strong and traits are heritable, it is expected that standing genetic variance for fitness should be rapidly depleted. Yet this is not what we see when we look at natural populations. Sexual antagonism may provide an answer since it means that the fitness of any given allele is context-dependent, preventing rapid depletion of genetic variance.

I have studied sexually antagonistic genetic variation in fruit flies (Drosophila melanogaster) for several years, and have recently begun research on the hermaphroditic flatworm Macrostomum lignano. Although it may seem strange to think of hermaphroditic organisms as experiencing sexual antagonism, there are good theoretical reasons to believe that this is the case. In addition to continuing research on fruit flies, I am therefore also carrying out an extensive investigation of sexual antagonism in M. lignano.

I am also one of several PIs in the EXEB research group (Experimental evolution, ecology, and behaviour) at the Biology Department at Lund University. Our group aims to investigate fundamental questions in ecology and evolution using theory-driven empirical research. You can follow the EXEB group's activities on our blog. I provide updates about my own research via twitter at @jessicakabbott.

I am originally from Canada, and started my undergraduate degree at the University of Guelph. During my third undergraduate year I came to Lund as part of an international exchange program. I liked it so much that I wanted to stay longer, and ended up living there for 8 years while completing a Master's degree and then a PhD on polymorphism in damselflies under the supervision of Erik Svensson.

I moved back to Canada in 2007 so that I could do a postdoc with Adam Chippindale at Queen's University in Kingston. I stayed there for just over two years, and moved back to Sweden in late 2009 so that I could join Ted Morrow's lab at Uppsala University. I worked there for two years, the second year as part of a collaboration with Klaus Reinhardt from the University of Tübingen. I returned to Lund again in February 2012. In 2015 I was awarded an ERC Starting Grant for my work on experimental evolution of sex chromosomes